Weed Vapes: How do they work?

Weed Vapes: How do they work?

Cannabis is a plant that originates from hemp Cannabis sativa and whose leaves, oil and resin are traditionally smoked as a joint.

A new consumption method that appeared in the United States at the end of the 1970s seems to have gradually found its place in many countries in recent years: vaporization.

This article will, therefore, first explain the difference between these two modes of consumption, then explain in detail the principle of how a cannabis vaporizer works by showing you the different types of vaporizers that exist.

Differences between combustion and vaporization

There are two main reasons for the growing popularity of vaporization. First of all, it is better for your health. Indeed, the combustion of plant matter is harmful to the body, as many toxic chemicals are released and ingested, such as ammonia and hydrogen cyanide. If you are used to mixing cannabis and tobacco, it is even worse, because tobacco contains at least 50 carcinogenic chemicals. By vaporizing your marijuana, it is kept at a temperature below the combustion temperature to prevent you from inhaling all its toxic elements.

Besides, vaporization is more effective in extracting the active ingredients from cannabis, such as THC, CBD, or CBG.

Thus, the rate of cannabinoids contained in the steam can reach 95% whereas it is only about 12% in the case of combustion because the vast majority of cannabinoids are destroyed. Vapor is therefore much purer than smoke.

It can also be noted that the vaporizer is much more discreet than a joint. If you use it outdoors, you will no longer have to worry about easily spotted smoke and the strong smell of cannabis.

Finally, combustion also destroys terpenes, non-toxic hydrocarbons that give cannabis its taste, aroma, and flavor and are very fragile by nature.

A cannabis vaporizer, how does it works? 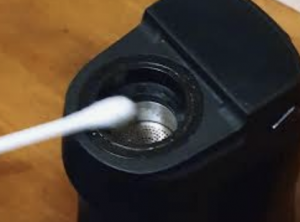 Here, the cannabis is heated directly by contact with the heating part of the vaporizer. It is the easiest process to implement and logically results in the cheapest vaporizers on the market. However, it is also the least efficient process, as temperature control is more delicate and heating is less homogeneous, thereby increasing the risk of combustion.

In this case, there is no direct contact between the cannabis and the heating element of the vaporizer; it is the hot air circulating the material that will allow for optimal extraction, as it is more balanced, thus reducing the possibilities of combustion.

The convection process can be manual or with a blower. If it is manual, it is the user who sucks in the steam directly, often with the help of a pipe, like a chicha. If the vaporizer has a blower system, it takes the form of a pump or fan that delivers a volume of warm air in a uniform and more efficient manner. This hot air will usually come out and be contained in a balloon with a nozzle that will then allow the user to vape it and inhale at the desired rate.